English: I have great news about Ajax. Ajax, handlet by Atle Skarsvåg, ran in herding trail class 1 yesterday, and passed the herding test as well. Congratulations ! Ajax is a son of our Astra Babe and Rick.

Here is the film of Ajax’s first lesson at sheep, few days before Atle Skarsvåg bought him. And now they have already been at their first trail. I don’t have any new film of him yet.

The Babe pups are growing well, eat, sleep and seem satisfied. Babe has been out with the gang for a long walk today, I belive she enjoyed to be out running again.

Here is the film I promised from Zac herding. Zac had hard work with these sheep, as they were shy from people and dogs.

Posted in Breeding, Congratulations, Everything, Video

But, the other side of this storry is that we don’t think that Zena is pregnant. So far Zena is just as slim as a teenager, and there is 6 weeks since she was mated.

Anyhow, we are sitting here watching TV, waiting for the Chilean people from the mining accident to come out. And, we are also waiting for the Babe pups. Babe are definitively pregnant. Could be about six pups, who knows 😉 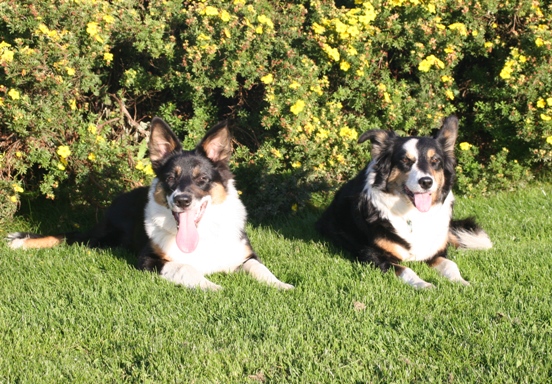 “My Trusted Friend” Asterix and his mother Teg

Posted in Breeding, Everything, Pictures

English: Zac is the farther to our upcomeing litter with Babe, and as I promised I would bring you a film of Zac herding. I found a film at my old computer from 2009 😉 I have a film at my new computer too, I will upload that one later.

And because nobody has seen Babe at sheep I decided to bring her to the sheep few days ago. Babe is not trained and she has hardly ever seen the sheep apart from a few times when she was young. Whow what a natural talent this girl is, she just did it and everything was there … (but we had to be careful as she is six week pregnant).

Posted in Everything, Video